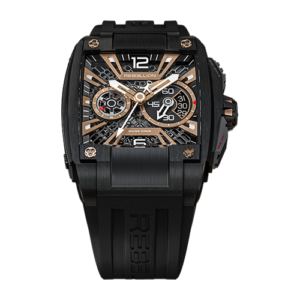 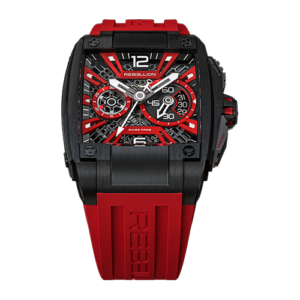 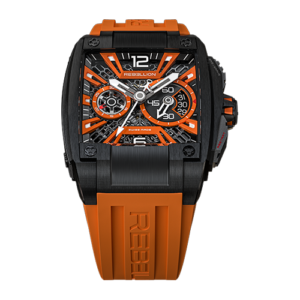 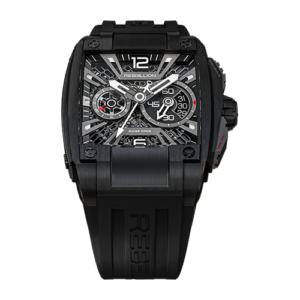 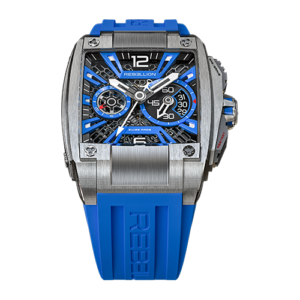 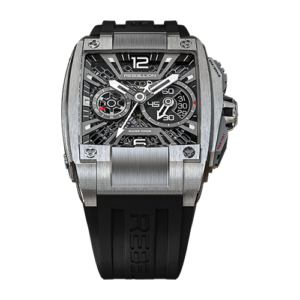 Official timekeeper of the legendary rally-raid for the third consecutive year, Rebellion is celebrating the event with a trio of limited edition timepieces. In addition to a Twenty-One 3 Hands and a Predator Chrono, Rebellion is unveiling an exclusive Re-Volt Chrono Dakar for this not-to-be-missed event for motor racing and watchmaking enthusiasts. Issued in a limited edition of 20, these timepieces feature warm desert tones and combine a powerful design inspired by the world of endurance championships with precise, robust Swiss Made mechanics.

The Re-Volt Chrono Dakar is a concentrate of the spirit of the race. Unique, demanding and uncompromising, this limited edition features a striking open architecture built around a titanium case with aerodynamic lines. Its ergonomics are designed like the cockpit of a GT car to facilitate its use. The hands move on a honeycombed dial designed like the grille of a supercar. The timekeeping is done with the help of two pushers in the shape of an accelerator pedal. The totalizer located at 3 o’clock has the features of a stylized rev counter. These and the indexes have golden tones. And to reinforce its “desert fox” personality, the Re-Volt Chrono Dakar is worn on a fabric strap in the colors of the rally tracks. Once again, every detail embodies Rebellion’s passion for the Dakar! An all-time first for the Re-Volt collection! A new timepiece approaches the starting line, a concentrate of the bold world of Rebel watchmakers. Bodied like a supercharged GT, the Re-Volt Chrono will transport you to a world without compromise. Its powerful design begins with the rectangular case with aerodynamic lines. The state-of-the-art mechanism is equipped with a practical complication: a Swiss Made self-winding chronograph movement.

When every second counts on the racetrack just as in everyday life, you might as well keep time with precision and style! Rebellion Timepieces is taking its expertise in timing such major endurance competitions as the legendary Dakar and applying it to watchmaking. Like all previous Rebellion Timepieces creations, with its design inspired by the cockpit of a racing car, the ergonomics of the new Re-Volt Chrono have received special care to facilitate its use. The open architecture of the Re-Volt Chrono offers a striking 3D view of its contours. Every detail of the timepiece expresses and embodies the brand’s passion for motorsport. Coated in luminescent materials, the hour and minute hands move on a honeycomb dial, mirroring a supercar grille. Any time up to 60 minutes can easily be measured using the two push buttons shaped like accelerator pedals. The results are read on the totalizer, shaped like a stylised rev counter and housed at 3 o’clock, with the central second hand. On the counter at 3 o’clock is a scrolling date display. Finally, a small second hand with a red tip placed at 9 o’clock balances out this highly graphic dashboard.

All time information is powered by a robust automatic calibre. Stamped with the brand’s logo, the crown is used to set the time and wind the movement. The Saudi Arabia sapphire case back reveals the stylised rim-shaped rotor, also adorned with the Rebellion logo at its centre.